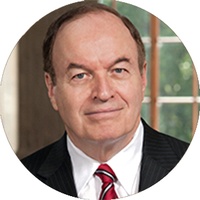 Senator Richard Shelby is the senior United States Senator from the State of Alabama. He was first elected to the U.S. Senate in 1986 and is currently in his sixth term.