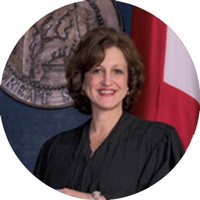 Judge Hall was first elected in 1996 and has been a Circuit Judge since February 2005. In Jan. 2010, she was elected by her peers to serve as Presiding Judge of this Circuit. Under her leadership, working with other elected officials, attorneys and citizens, the Juvenile Justice Center was established, the Madison County Law Library was modernized and renovated, the Court Administrator’s Office was restructured, additional funding for court/clerk personnel was secured, and delivery of services to indigent citizens and courthouse security were evaluated and new procedures implemented.