Keep Watching the Skies: A Very Subjective History of Science Fiction Films in Hollywood,1950 to the Present
Instructor: David Lilly

LearningQUEST will present a free public program at the Downtown Library Auditorium on Monday, Nov. 29,  from 10 a.m. to 11:30 a.m.

This program will explore the history of Hollywood science fiction films as a genre meant to entertain adult audiences. These films, which began in the early 50s, seem to have run in cycles until the early 80s, at which time they became an immensely popular and permanent go-to film genre. They were also significantly influenced by the fears, interests, and concerns of their time, and the presenter will explore the historical background that made these films what they were.

The program will include a number of film clips of some of the best (and worst!) of these movies. It should be an entertaining and informative presentation for anyone who grew up watching these films and who continues to love them to this day, or for anyone who is open to becoming a fan. 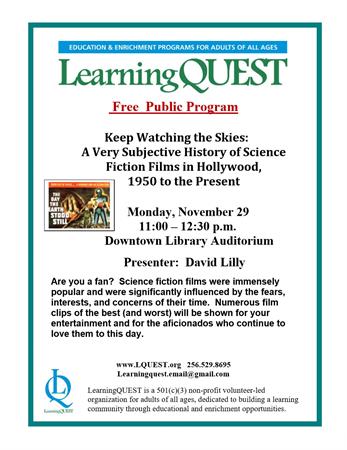