The PTK members along with their advisors spend several months each year drafting and editing write-ups for two major projects that are evaluated and judged during the Annual PTK Regional Convention. “The write-ups are scored by PTK headquarters, and chapters receiving high scores in various categories are recognized at both regional and national conventions,” commented Dana Burton, Calhoun Speech Instructor and PTK Advisor. “We are so proud of the time and dedication each of the students put into each project submitted,” added Burton.

A total of 33 PTK chapters across the state of Alabama competed in this year’s regional convention, placing Calhoun’s chapter in the top 5 for the region with the following awards:
“I was extremely impressed when I received the news that our PTK chapter was named first runner up for the most distinguished chapter award,” commented Dr. Joe Burke, Calhoun Interim President. “This prestigious award not only speaks volumes of the talent and determination of our students, but it also speaks greatly of the commitment from our PTK sponsors,” said Burke.

Calhoun’s chapter has landed a spot to compete in this year’s PTK Virtual International Convention, which will be held in April.

To learn more about Calhoun’s PTK chapter, visit www.calhoun.edu/ptk. You may also find regional news for Alabama chapters at alabama-region.ptk.org.

About Phi Theta Kappa
Phi Theta Kappa is the premier honor society recognizing the academic achievement of students at associate degree-granting colleges and helping them to grow as scholars and leaders. The Society is made up of more than 3.5 million members and nearly 1,300 chapters in 11 nations, with approximately 240,000 active members in the nation’s colleges. Learn more at ptk.org. 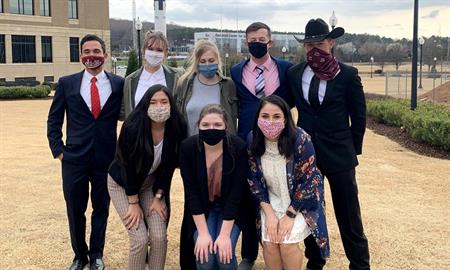