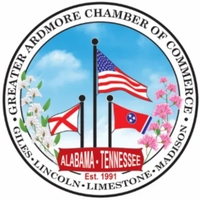 The Greater Ardmore Chamber of Commerce serves the Town of Ardmore, Alabama, and the City of Ardmore Tennessee. Ardmore is rare in that it is in two states, Alabama, and Tennessee, and four counties, Limestone (AL), Madison (AL), Giles (TN), and Lincoln (TN). This can make city, county, and state government a very interesting task at times. Ardmore has two mayors and a town and city council. They have one police and fire department that service both the town and the city.